This flicker was gorging himself on backyard feede

Have been using #lightroompresets to enhance these

Both of us• Lee Ann• Sue• Travel• Uncategorized

October 25 – The most wondrous 2.5-mile trail I have ever walked was breath-taking, in more ways than one. The one must-do hike for me on our Utah National Parks itinerary was a combination of the Navajo Loop and Queen’s Garden trails at Bryce Canyon.

An elevation change of 320 feet did not sound like a lot, but what goes down must come up. Starting at Sunset Point, you descend into the canyon via a series of switchbacks that are glowing salmon. It was 26 degrees when I began at about 9:15 a.m.

Whereas Zion is majestic, Bryce Canyon is magical. Its most defining feature are the thousands of fairy-like hoodoos that are created by the forces of erosion over the ages. Now I was among them, rather than looking down on the vast amphitheater filled with them. They are a fairytale megalopolis, changing shades of pink by the hour, mystically luminous. It is one of the most amazing sights I have seen in my 61 years.

An hour later, I had shed two layers and was on my way up to Sunrise Point. I could see the overlook far above. A grimacing flatlander from sea level climbing at over 8,000 feet generated many reassurances of “not too far” and “you’re almost there.” Breathless, I sat down on a bench with a wise woman from the Netherlands who appeared like a muse and quoted John Muir to me, paraphrasing this longer passage:

“People ought to saunter in the mountains – not hike! Do you know the origin of that word ‘saunter?’ It’s a beautiful word. Away back in the Middle Ages people used to go on pilgrimages to the Holy Land, and when people in the villages through which they passed asked where they were going, they would reply, ‘A la sainte terre,’ ‘To the Holy Land.’ And so they became known as sainte-terre-ers or saunterers. Now these mountains are our Holy Land, and we ought to saunter through them reverently, not ‘hike’ through them.”
– John Muir, as quoted by Albert W. Palmer, The Mountain Trail and its Message (1911) pages 27-28 – excerpted in A Parable of Sauntering.

I picked up my backpack and the trekking poles I had borrowed from Sue and sauntered the rest of the way up to Sunrise Point, where onlookers were gawking down at the Holy Land I had just exited.

From Capitol Reef to Bryce Canyon

The morning before that hike, on October 24, we left Torrey for Bryce Canyon on Utah 12, a Scenic Byway billed as one of the most beautiful drives in the United States. It climbs to 9,600 feet within the Dixie National Forest. We stopped for breakfast in Boulder at Magnolia’s Street Food, a turquoise “food bus” located on the site of a state park and museum.

Who wouldn’t trade a bland motel breakfast buffet for the experience of sipping coffee among the pines and eating a burrito stuffed with eggs, goat cheese, cilantro and potatoes? It was a beautiful, sunny mountain morning.

After breakfast, we entered the Grand Staircase-Escalante National Monument, almost 2 million acres of endless slickrock, sandstone cliffs and slot canyons. For miles we drove along a crest with severe dropoffs on either side. I stopped the Jeep at a turnout to fly my drone out over the undulating sea of white slickrock.

Utah 12, like the Bicentennial Byway the day before, was a destination in itself. But sometimes, while driving the ups and downs and twists and turns, with dropoffs to canyons below and astonishing landscape changes, I felt as if I were going to stop breathing. By the time we reached the tiny town of Escalante, I was happy to have a few miles of “normal” scenery to drive through.

We reached Bryce Canyon National Park about noon. While trying to get my backpack out of the rear of the Jeep I lost my balance and accidentally punched Sue in the mouth and nose. After she recovered somewhat, we had a picnic lunch in the park and did some hiking.

Even though there were still plenty of tourists, most restaurants in Bryce Canyon City had closed for the season. We ate pretzel rods and drank Uinta in our spacious hotel room and called it an early night.

Next: On to Zion 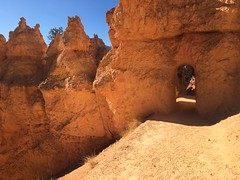 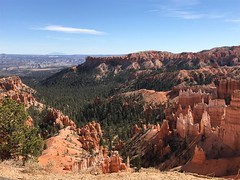 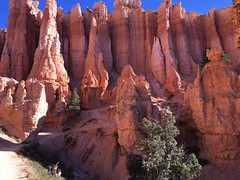 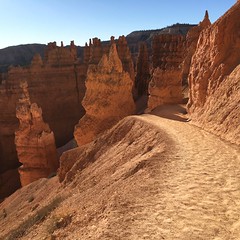 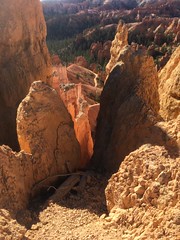 The trail down below 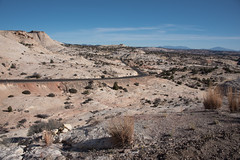 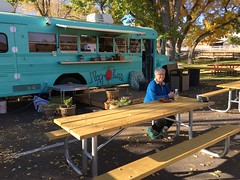 Magonolia's - Breakfast at Boulder
A great place along Scenic Route 12 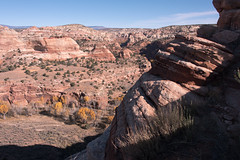 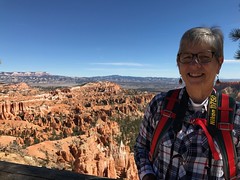 Me and the hoodoos 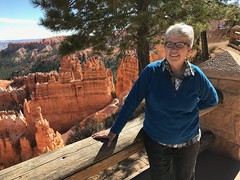 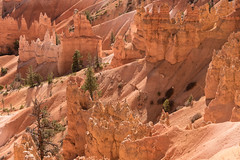 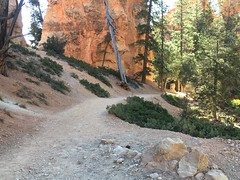 Down in Bryce Canyon 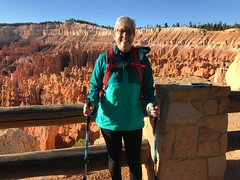 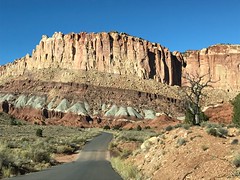 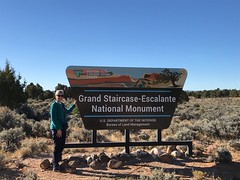 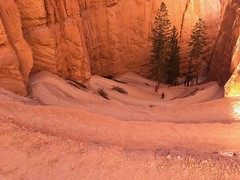 A view from the top of that hill

How’m I doing? Resolutions at the end of January